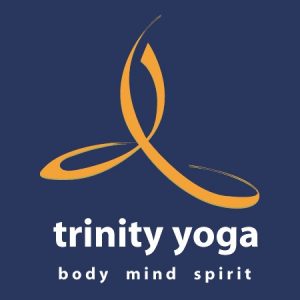 Trinity Yoga Teacher Training and Personal Development was established in 2001 by Mary-Jo Fetterly, the founder.  With the intention of establishing a thorough and unique training program for aspiring teachers, Trinity Yoga created a top notch program that was steeped in personal development, technique and yogic philosophy.  With the addition of partner Jennifer Steed and a great team, Trinity soon became one of the most sought after schools in Western Canada and within a few years was branching out to reach students across the country.

Trinity Yoga originated the three tiered program with level 1, 2 and 3 comprising a 200 hour international certification. Trinity was also unique in that it was a mobile training program. One of the challenges that Mary-Jo encountered years ago while teaching in rural British Columbia was the lack of quality teachers or training programs. This she was convinced was not for lack of want or need but simply rather, a lack of access or resources.  Something Mary-Jo set out to change.  In the early days Jennifer and Mary-Jo covered many miles in their minivans stuffed with Yoga Props and teaching material, travelling all over BC and Alberta, fondly referred to as “the dog and pony show”.

Drawing from their combined and extensive backgrounds Mary-Jo and Jennifer offered a one-of-a-kind experience and exposure to the tradition of yoga.  Bringing in guest teachers and experienced professionals, Trinity Yoga expanded and trained new facilitators.  Mary-Jo and Jennifer created a network and family of yoga teachers and practitioners, most who contribute to the sharing of yoga to this day.

After Mary-Jo’s skiing accident in 2004 it was uncertain where and what would happen with Trinity Yoga. Although Mary-Jo taught for two years post injury it was clear that traveling and teaching so much was taking a toll on her traumatically injured body, and she retired in 2006.  In 2008 some of the new facilitators went on to form Gayatri Yoga and Trinity Yoga was put to rest temporarily.  From 2006 until 2012 Mary-Jo was on a rehabilitation and healing sabbatical.  Still working closely with her teacher Rod Stryker as well as other well-known healers Mary-Jo put Yoga and her constitution to the test.

From similar beginnings and impulses as when Trinity yoga was first established back in 2001 Mary-Jo felt the need and the importance to share what she had learned and how yoga and the healing science of Ayurveda dissolved  ‘illness and impossible’ from injury.  Then in 2014 Trinity Yoga rebirthed itself into updated school with a comprehensive new 300 hour program specializing in the A.R.T. of living well with yoga concept. This concept born out of Mary-Jo’s 10 years of disability defines ART as Adaptive, Restorative and Therapeutic. This program offers specialized training for yoga teachers who have accomplished their 200 hour certification; as a 45 hour continuing Ed course for healthcare professionals, caregivers, family and therapist’s who work with the physically challenged and special needs population in some capacity. 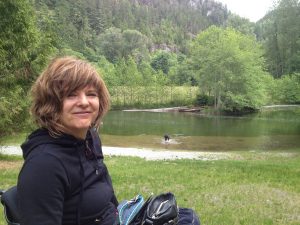 My journey – a magical ever evolving, healing and revealing journey, which by the grace of The Great One – I am deeply blessed, humbled, grateful and in AWE for the wonder of life and the potency of The Life Force.

Mary-Jo Fetterly was born on New Years Day in 1958 at the end of the baby boom era, and grew up in a large family in Kamloops, British Columbia. Her father Norman, was a lawyer and played a central role in establishing the first human rights tribunal in Canada. Her mother Ruth became one of British Columbia’s first yoga teachers in the 1970’s, founding the Centre for Stress Reduction in Kamloops, one of the first institutions in the area to utilize yogic techniques for stress management. She was also a disciple and close friend of renowned teacher Swami Radha, and introduced Mary-Jo at a young age to yoga and meditation practices.

When Mary-Jo was seven years old she had a unusual fall that greatly influenced her world-view and spiritual awakening. She slipped on a roof of a house under construction, fell into a chimney flue landing four stories down onto the floor of a concrete basement. (Her mom says she landed on her angel) Mary-Jo was in a coma for three days, in which she had the vivid memory of experiencing herself as an energetic being, able to observe her physical body from a distance. She made a full recovery without any lasting injury, although the experience of her self as an energetic body existing within, yet also distinct from her physical form, had profound effect. The experience inspired at a young age many questions and insights, and laid the groundwork for a lifetime of spiritual inquiry and discovery.

Mary-Jo was to go on to have many auspicious teachers and significant encounters. In her twenties after receiving training in hotel and restaurant management she traveled, worked and learned about healthy eating, yoga, and life. She gave birth to her daughter Amanda in 1985, which she describes as the saving grace of her twenties. She bought a farm and settled down on the west arm of Kootenay Lake to raise her daughters, Amanda and Kate, who was born in 1987. Mary-Jo raised the girls on her own, teaching them to ride horses and work the land. She opened a cafe in the remote community of Proctor, BC, whilst pursuing a degree in Social Development and Spiritual Studies at the University of Waterloo by correspondence.

During this time she continued her own yoga practice, beginning her formal training in Iyengar yoga in the mid 80’s. In 1995 she studied Re-balancing a “Body Centered Therapy”, receiving a certificate in massage and bodywork. She went on to train with: Dr. Carolyn Myss who is now one of the leading educators in the field of energy anatomy and intuitive medicine; David Swenson, Tim Millar; Nancy Gilgoff in the early rise of Ashtanga or Vinyasa hot yoga. Subsequently, she opened “Shanti Yoga Works”, the first yoga studio to be established in Nelson, BC. During the first operational years of Shanti Yoga, Mary-Jo developed a 200 hour yoga teacher training program, and formed the company “Trinity Yoga”, which has trained hundreds of yoga teachers since it’s inception. Her own yoga studies continues, and she has had the opportunity to study with teachers Adyashanti, Ana Forest, Jivamukti, Donald Moyer, Father Joe, Rod Stryker and Emily Conrad & Susan Harper of Continuum. She is now working on a Master practitioner/teacher in Tantra philosophy and techniques with her teacher Rod Stryker, and continues to teach classes in and around Vancouver.

On January 25 2004, Mary-Jo had a severe skiing accident that crushed her C4, 5 and C6 vertebrae and left her paralyzed from the neck down. She was diagnosed with Asia A Complete  “worst case diagnosis” predicted by doctors.   Her journey back to health and coping with her current situation – defied odds, and is a miraculous recovery due to hard work, faith, knowledge, insight, determination, and strong willed optimism.

Adjusting to life in a quadriplegic body has been an extremely challenging yet incredible journey for Mary-Jo. Her strength, resilience, and determination, not to mention the unbounded love and support from her daughters, family and friends has allowed her to reach a level of mobility and independence that her doctors pronounced impossible. Drawing deeply on her knowledge of yoga, Mary-Jo regained full lung capacity through daily pranayama (breath work) exercises. Through a largely self-designed rehabilitation program combining physiotherapy, yoga, acupuncture, Ayurveda medicine, hydro therapy, myofascia release & massage , Mary-Jo has regained use of her arms, and core and remarkable movement in her legs;  living free of pharmaceutical medications and typical complications of paralysis, an incredible feat for one of her condition.

The devastation, difficulties and challenges of the spinal cord injury haven’t held her back as Mary-Jo continues to mother, teach and inspire others to engage in their own personal journeys of healing and transformation. Although Mary-Jo’s prognosis with a spinal cord injury of her severity was devastating and in most cases fairly bleak she has managed to overcome the odds and live healthy and productive life as well as achieve remarkable progress on her own healing journey utilizing the tools and the gifts from her lifelong learning. It is her wish to share that hope with others.

“No matter what obstacles or challenges we face, there is the capacity within each of us to transform.”
– Mary-Jo 2004